This was our first week of school for this year! Our focus was on the letter A and Number 1! We also did a shape review this week so I could figure out which ones we needed to work on! We have also worked on our reading and math. Heres a few pictures of Austin and Dylans school week.(yep you see that right im going to be using there names from now on, on here! It was too hard to try not to lol)

First we started with our Alphabet craft. They made apples out of the letter a. I found the idea here: http://totallytots.blogspot.com/2010/06/now-i-know-my-abcs-is-for-apple.html 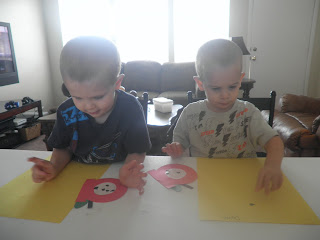 Austin had a math work sheet where he had to count the ants and then match the number on the paper and glue it on. 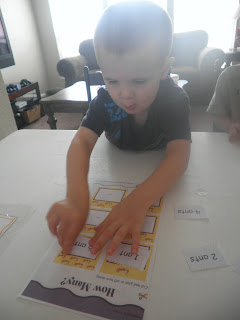 Apple Size Sort. Last year he had a hard time with this but now he did it perfect the first time! I got it from here: http://lovemylifex4.blogspot.com/2009/08/alphabet-fun-letter.html 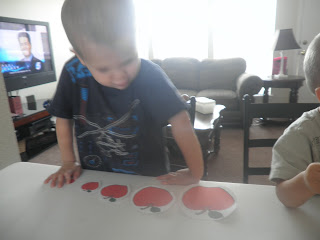 For our art time he learned how to draw an ant and also follow directions. 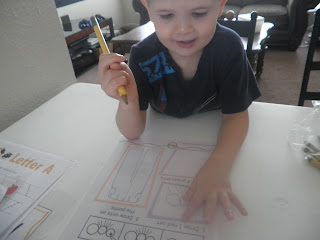 Our Shape Review. You can find these on Confession of a homeschooler Scroll down to shapes then hit Shape Tracers: http://confessionsofahomeschooler.blogspot.com/2009/11/my-printables.html 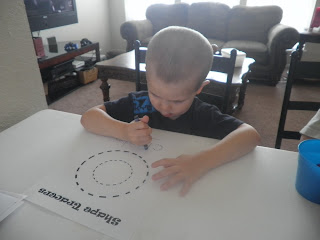 Dylan worked on our Color Bears. He doesnt quite get that the colors match but he has fun pouring them and also he is starting to learn what color is what! 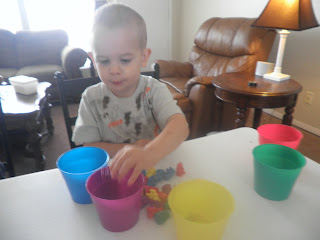 Austin did an Alphabet sorting. He had to match the apples which had a lowercase or uppercase A on them to the one thats on the tree. I got it from here: http://lovemylifex4.blogspot.com/2009/08/alphabet-fun-letter.html 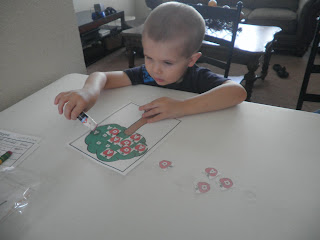 Dylan worked on this puzzle alot this week! He loves when I take all the pieces off and mix them up and he has to try to put them back on before I take them off again! 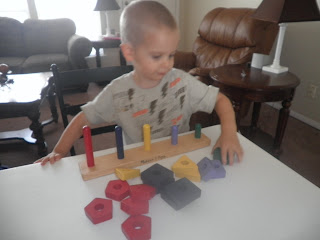 Austin worked on Pattern Blocks this week quite a bit too! He enjoyed them since they were new. I got them from here: http://prekinders.com/pattern-blocks/ I just printed 2 sets then cut out 1 set and laminated them instead of buying the blocks! Much cheaper in my eyes! 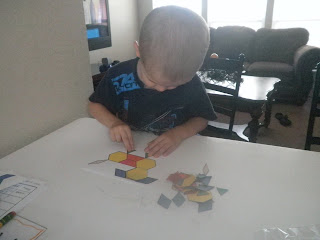 Dylan was so proud of himself when he did this puzzle all by himself! He is also able to say half of the shapes on this puzzle! 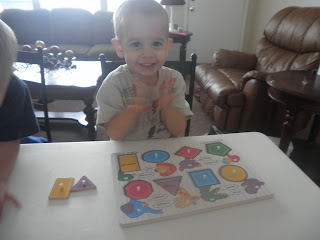 We started a Daily Journal this week. They will draw in it for 10 to 15 minutes at the beginning of our school day. This day I told them to draw something outside. Austin decided to draw a tree which is in the middle then he proceeded with a house, flowers, a bed(not quite sure where hes seen one outside but he said he did), a sun and clouds, and a firetruck! I think he did a great job and wanted to share it with yall! 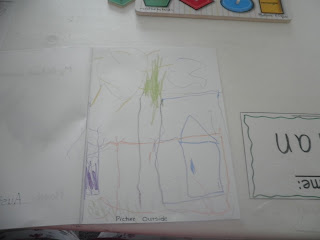 Ill be back tomorrow with 4th of July pics and also be starting my blogging through the Bible in 90 days!